In 1961, General Motors installed the first industrial robot, Unimate, in one of its factories. It was essentially a robotic arm that relieved human workers of the dangerous task of picking up die castings from an assembly line and welding these parts onto vehicle chassis.

Physically, traditional stationary robots like Unimate can be tremendously powerful, with the modern equivalent being a robot arm fixed in place, working with large, heavy objects, and performing repetitive precision tasks.

Unfortunately, the “power” most industrial robots exhibit is combined with limited intelligence and little-to-no understanding of their surrounding environment. Because these robots are not equipped with sensors that allow them to detect the presence of humans and other obstacles, nor control systems that enable them to react if they were to encounter an obstruction, they must be isolated to confined spaces and very specific functions. This is a drawback for today’s digital use cases that prize efficiency, agility, flexibility, and mobility, not just in the connected factory but in logistics, smart retail, and other automated applications as well.

Today manufacturers are seeking to build safe systems where robots and human operators can work together in the same space, at the same time.

But before these revolutionary cobots can be deployed at scale, new functional safety (FuSa) standards and technologies that comply with regulatory requirements are needed.

Safety on the Smart Factory Floor

Although cobots are cutting-edge technology, industry standards organizations have been working on new technical FuSa specifications such as ISO 10218-1/2 and ISO 15066 for some time. These build on existing standards to define the safety requirements for cobot system designs. Some of the myriad safety standards and requirements defined by those organizations (Figure 1). 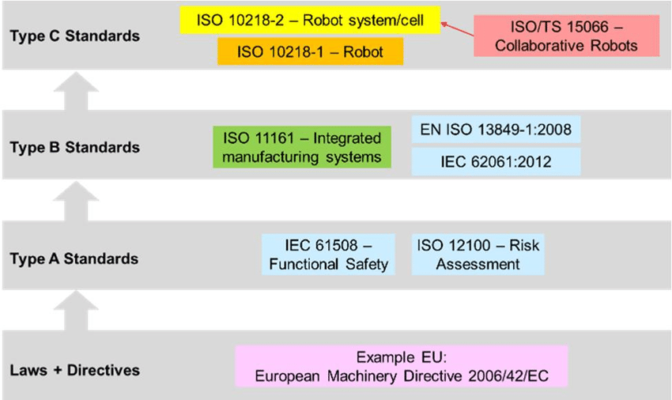 Implementing all of the required standards from the ground up for every part of the system is expensive, time-consuming, and resource-intensive. One way to mitigate these issues is to implement the robot’s control safety- related system using hardware and software that have been designed with FuSa capable components.

One such technology stack can be found in NEXCOM International’s NexCOBOT SCB 100 safety control board (SCB), which is based on Intel Atom® x6000E Series processors. It provides a robust safety capability for next-generation autonomous robot controllers.

The SCB 100 robotic control board provides a single platform that enables addressing functional safety in cobot systems. It is IEC 61508 SIL2/SC3 ready, and enables the support requirements of new safety standards like ISO 10218-1/2 and ISO 15066 from the hardware level and up the stack. When accompanied by an appropriate safe real-time operating system (RTOS), the SCB 100 allows developers or systems integrators to add their own safety-related application software and hardware components to provide differentiated, quick-to-market cobot designs.

The platform includes all of the interfaces and I/O needed for integration to a robotic system design. Its content of all the aforementioned components makes it a prime element of a robot controller system. This eliminates the need for a separate, discrete safety controller, and reduces cost and complexity.

Cobots: The Future Is Now

To deploy cobots and have them interact with humans in close proximity, often in a shared workspace, it is necessary to equip these machines with sophisticated control and safety processing platforms. The SCB 100 is one platform helping accelerate the transition from GM’s Unimate to 21st-century cobot designs.

Not all SKUs include every feature.
Not all features are supported in every operating system.
Not all SKUs support real-time computing, time-sensitive computing, or time-synchronous networking.